At UMass Memorial, labor and management put safety on their shared agenda

The relationship between management and unions can be adversarial, but leaders of UMass Memorial Health Care and its unionized staff are out to prove that working together can actually improve efficiency, job satisfaction and patient and employee safety.

This approach, pioneered by Kaiser Permanente in 2005, brings together labor and management co-leads to identify and implement solutions to patient and employee safety issues. 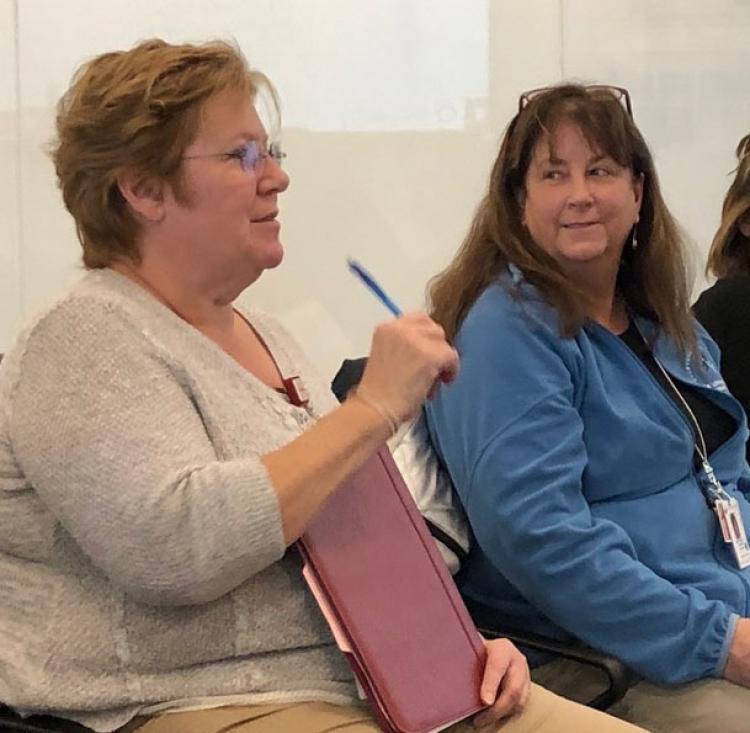 UMass Memorial Health Care and SHARE, a union that represents about 3,000 UMass Memorial employees, are collaborating to engage staff members in improving the quality of patient care, workplace safety and job satisfaction.

SHARE members include respiratory therapists, radiologic technologists, nursing assistants, administrative workers and other positions (not registered nurses) that contribute to the success of patient care.

Labor-management teams improved processes and job satisfaction in the five units that first implemented this program, which has now been expanded to 13 teams.


“It just struck me that given all the acrimony in this state around the nurse staffing ballot initiative, this was a model of where we can go as an industry in terms of collaborating between management and labor,” says Douglas Brown, President of UMass Memorial Community Hospitals and Chief Administrative Officer, referring to the unsuccessful effort last year to institute mandatory nursing staff levels in hospitals across the state.

The concept had a willing partner in SHARE, says Will Erickson, Organizer for Process Improvement at UMass Memorial Health Care and the initiative’s labor lead. Erickson, who began his career as a union organizer, had come to recognize that member job satisfaction is as important as salary and benefits.

“The purpose of our partnership and unit-based teams and our union’s involvement in this improvement work is really to change our members’ everyday experience of being at work,” says Erickson. “The hunch we had when setting this up is that the workers would want to do it. That they would really want to get involved at this relatively high-level decision-making, problem-solving experiment running around how to improve care.”

It just struck me that given all the acrimony in this state around the nurse staffing ballot initiative, this was a model of where we can go as an industry in terms of collaborating between management and labor.

Improving communication in the Heart and Vascular Center

Radiologic technologist Susan Maddalena, a 20-year UMass Memorial employee, is the labor co-lead of the unit-based team in the Heart and Vascular Interventional Lab. She quickly identified communications as a major problem: management’s reliance on email didn’t work well in the cardiac catherization lab.

“We’re a procedural area, so we’re not sitting at desks or computers,” she says. “For us to go in to look for emails would be a separate work flow.

“If you were one of the three people who were there when [a manager] said it, you heard it,’ she says, referring to any changes that might affect the Center’s work. “It was never sort of preemptive, trying to make sure everyone knew beforehand.”

Maddalena and her management partner convene daily, 10-minute briefings that the team decided would address the problem. At these morning sessions, the resource nurse runs through clinical issues, and Maddalena updates information on anything from supplies to in-service training schedules.

“They literally ring a cow bell, bring everyone together and talk through plans for the day. It’s an effective, standardized process,” says Erickson. Registered nurses, although members of a separate union, and even some physicians are part of these daily check-ins.

“My sense is that nurses and doctors have seen this is a really good thing, and they are helping it go well. They see it as something that benefits them,” Erickson says, adding one of the challenges is more closely integrating physicians into that work.

Similar work done by the team in the Surgical Vascular Lab allowed for the training of more techs to do more of the 31 tests the lab performs, which has improved scheduling.

The two vascular labs were among the original five unit-based teams launched 18 months ago, now expanded to 13 teams. The labor-management collaboration model was presented by SHARE and UMass Memorial Health Care in a poster at the Institute for Healthcare Improvement’s National Forum conference in 2018.

Erickson also points to the work of a Prescription Center team that resulted in 90 percent of prescriptions being ready by promised pickup times, up from 30 percent. How? The team eliminated the single biggest source of delay — being interrupted by the constantly ringing telephone.

“We had them fill out tick sheets describing why people were calling the pharmacy. It turned out, the top two reasons were things they didn’t need to call the pharmacy for,” he says. “So, we had them design a project where they were educating patients and staff on those two things. And the number of phone calls into the pharmacy dropped by 40 percent. So that’s 40 percent fewer interruptions of that nature that were getting in the way of them being able to do their work perfectly and accurately every time.”

Units across the hospital also meet weekly for “idea-board sessions,” where labor and management review problems and issues encountered over the course of a week.

“They are literally poster-size whiteboards that are up in every department. Every time you encounter a problem in your day-to-day work, you write it down and take a crack at identifying what the root cause of that problem could be. And then you propose a solution,” Erickson says.

“We actually empower frontline workers to join with their manager and to co-lead these teams,” says Brown. And that’s what is so powerful both for the manager and for the staff. It offers the opportunity for staff to demonstrate leadership and become vested in their own unit and their success. And for the manager, it is an opportunity to step back and learn how to coach and mentor rather than direct every task.

The hunch we had when setting this up is that the workers would want to do it. That they would really want to get involved at this relatively high-level decision-making, problem-solving experiment running around how to improve care.

“They know much more than I do about how to improve their work and how to deliver great care to the patients — how to provide really safe care and how to avoid injuries,” Brown adds.

In keeping with UMass Memorial Health Care’s commitment to Lean, the Toyota Production System process improvement model, all new employees receive “white belt” training with the opportunity to advance up the belt system with continued training

Focus on the frontline

Combined with the installation of an Epic electronic medical record system, the unit-based team approach to safety is also a way to tackle issues that have led to lower quality ratings from Leapfrog and the Centers for Medicare and Medicaid.

“It’s really nurturing improvement and a focus on safety and quality right at the ground level,” says Brown.

And that is really the only place where this improvement can take place, says Adrienne Eaton, Dean of the School of Management and Labor Relations at Rutgers University and co-author of The Evolving Healthcare Landscape: How Employees, Organizations, and Institutions are Adapting and Innovating, which examines the various collaborations, including UMass-SHARE.

“It’s difficult to see how in the long run you can make real improvements without labor and management engaging together because it’s ultimately the folks on the ground who are making decisions on how care in going to be delivered,” says Eaton, who is currently studying the role of front-line UMass managers in the unit-based teams. “It’s hard to see how you can get traction without engaging with management around these issues.”